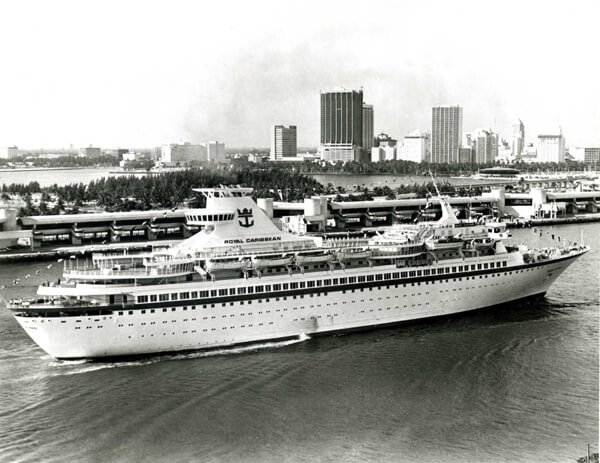 The next to last of the 1960s purpose-built cruise ships that helped to build the modern cruise industry was beached yesterday in Pakistan to be broken up and recycled. Introduced in 1972 as the Sun Viking, the stylish 18,500 gross ton ship was built for Royal Caribbean Cruise Line and was the last of the first generation of modern cruise ships that helped to create PortMiami and the cruise vacation industry.

The third ship built for Royal Caribbean, she was ordered when Gotaas-Larsen joined as an investor in the new cruise line alongside Norway’s Wilhelmsen and I. M. Skaugen. The traditional Norwegian shipowners had been temped into the cruise business by a young executive, Edwin Stephan who had a vision for the modern cruise industry. He was developing his concept for “propelled hotels” where the cabins would be standardized for easier sales and smaller to encourage passengers to be on deck and in the lounges and bars. Stephan envisioned cruising focusing on high passenger density to create what he called the “volume economy market.” He also was a pioneer in the fly-cruise market bringing passengers from California on chartered airplanes for his Caribbean cruises.

Royal Caribbean launched in 1970 offering seven-day cruises from Miami aboard the Song of Norway and followed in 1971 and 1972 with two additional ships, the Nordic Prince and the Sun Viking sailing on alternating Saturdays from Miami on a 14-day Caribbean loop. The Sun Viking was a slightly enhanced design versus the first two sister ships with additional streamlining and an extra half deck to expand her passenger capacity but also measured just 563 feet in length.

As the cruise industry grew. Royal Caribbean expanded the first two ships but skipped the reconstruction of the Sun Viking, instead focusing on new ship construction. As the smallest ship of the fleet and the only one with the original design, she became a pioneer for the company operating the first cruises outside Miami, sailing to Mexico, Alaska, and in the mid-1990s repositioned to Asia.

The Sun Viking became the last of the original cruise ships to leave Royal Caribbean’s fleet, delivered in 1998 to new owners, a start-up Asian cruise company called Star Cruises. Star however shortly after accepted an offer from Hyundai Merchant Marine Company. By the 2000s, though she had begun the final phase of her career being sold to a series of owners that used her as a floating casino ship in Asia. The collapse of the Hong Kong ship casino market saw her sold one final time, renamed Oriental Dragon, and transferred to Malaysia as a casino ship.

After the pandemic struck, her last owners largely abandoned the ship while attempting to fight off creditors. She was finally ordered sold at auction by the Malaysia Admiralty Court late in 2021 acquired by resellers for the scrap industry. She recently left the anchorage at Penang and after a brief stop off the coast of India proceeded on to Gaddani, Pakistan where the scrappers had won the bidding and her long career officially came to an end.

She outlived her two sister ships and nearly all the original cruise ships that started sailing from PortMiami in the late 1960s and early 1970s. Despite multiple overhauls that had removed her original interior design, the exterior of the former Sun Viking remained original. She had a distinctive lounge cantilevered from her funnel that Stephan said was inspired by the Seattle Space Needle and became the original trademark for Royal Caribbean. For her size, she had large areas of open deck space and a mid-ship pool area, each protected but distinctive curved glass windscreens.

Long outclassed by modern cruise ships that are ten times her size, the Sun Viking was a reminder of the origins of the modern cruise industry. The last survivor of the era is now the 1968-built cruise ship known then as the Boheme, which was a converted car ferry design owned by Wallenius today best known for their car carriers. Since 1986, the Boheme has been owned by the Church of Scientology operated as the MS Freewinds in the Caribbean as a retreat for church elders.