As tensions between the U.S. and China heat up in the Western Pacific, the Chinese Communist Party’s leading opinion outlet called for the People’s Liberation Army to dispatch fighters over Taiwan and “even carry out an economic blockade on the island,” despite the risk of starting a war.

In an editorial titled “Teach the US, Taiwan island a real lesson if they call for it,” the Party-owned outlet Global Times expressed outrage at reports that the Biden administration is considering a name change for Taiwan’s government office in Washington, D.C. This low-key diplomatic mission has long operated under the name of the “Taipei Economic and Cultural Representative Office” – a name carefully selected to minimize any sign of nationhood status, which would be offensive to China. The Biden administration is reportedly considering whether to change the office’s title to the more provocative “Taiwan Representative Office.” The move would not grant Taiwan an embassy, nor formal American diplomatic recognition, but it would put the word “Taiwan” in the mission’s name for the first time in decades.

Global Times called for a “punitive” response if the Biden administration follows through with this plan.

“It’s anticipated that China will recall its ambassador to the US and it is likely the ‘lowest diplomatic reaction,'” Global Times’ editorial board wrote. “At that time, the mainland should impose severe economic sanctions on the island and even carry out an economic blockade on the island, depending on the circumstances. Militarily, Chinese mainland’s fighter jets should fly over the island of Taiwan and place the island’s airspace into the patrol area of the PLA. This is a step that the mainland must take sooner or later.”

Global Times welcomed the possibility that PLA flyovers could lead to war. “Let us be fully prepared that there will be a showdown in the Taiwan Straits. Let us crush the will of the [Taiwanese] authority with our strong will,” wrote the paper’s editorial board in a follow-up essay. “Let us send our first PLA fighter jet over the island of Taiwan at the most accurate time. That will be a milestone on China’s path to reunification.”

The U.S. has a policy of “strategic ambiguity” about whether it will come to Taiwan’s defense, but defeating a Chinese amphibious assault on the island has always been an implicit part of the mission for U.S. Pacific Fleet. Earlier this year, outgoing head of Indo-Pacific Command Adm. Philip Davidson warned the U.S. Senate Armed Services Committee that an invasion of Taiwan may happen this decade – and that the U.S. may not be able to halt it. “We are accumulating risk that may embolden China to unilaterally change the status quo before our forces may be able to deliver an effective response,” he said. “I think the threat [may] manifest during this decade, in fact, in the next six years.”

Tensions in the South China Sea

The U.S. and China are also at loggerheads over sovereignty in the South China Sea. China claims the overwhelming majority of the region as its own, including areas located hundreds of miles from Chinese shores, and the U.S. Navy regularly contests these claims.

On September 1, a new Chinese maritime traffic safety law requiring certain foreign vessels entering “Chinese territorial waters” to notify Chinese authorities came into effect. The U.S. (and China’s neighbors) are concerned that the law will be used to reinforce Chinese claims to governance over contested areas, like the Spratly and Paracel Islands. Last week, the U.S. Navy Arleigh Burke-class destroyer USS Benfold sailed within 12 miles of Mischief Reef – a land feature in the Spratly Islands that China has turned into a large military base – without requesting advance permission. China asserts that Mischief Reef and the waters around it are Chinese, though it lies within the Philippine EEZ.

“This freedom of navigation operation upheld the rights, freedoms, and lawful uses of the sea. USS Benfold demonstrated that Mischief Reef, a low-tide elevation in its natural state, is not entitled to a territorial sea under international law,” the Navy said in a statement.

Shortly after, the carrier USS Carl Vinson conducted an exercise off Indonesia using the Navy’s new frontline fighter, the F-35C. It was the first operation featuring the aircraft in the South China Sea, according to Pacific Fleet.

Open-source intelligence analysts reported that Carl Vinson’s position was in the Natuna Sea, just outside of Chinese-claimed waters.

“When we deployed, we brought with us the unprecedented stealth, electronic warfare and vertical lift capabilities of the air wing of the future, and these platforms have delivered,” said Rear Adm. Dan Martin, commander of the Vinson Carrier Strike Group.

Prior to entering the South China Sea, the strike group also conducted interoperability flights with the Royal Navy’s HMS Queen Elizabeth – another allied operation aimed squarely at sending a message to China. 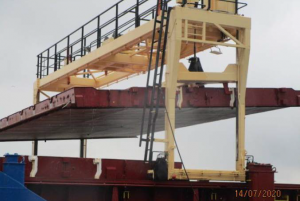